The 1st Black Livity China Conference is taking place on the 6th of February 2021, building on our mission to document and demystify the experiences of African and Caribbean peoples in China and in relation to China and to amplify the voices of those within our global community.

The conference seeks to combine the researched insights of both experts of African & Caribbean descent as well as those with firsthand experiences of life in China in order to provide a comprehensive overview of each topic. Through consultation with our community, we’ve identified three umbrella topics that will be crucial to understanding the ever-evolving nature of Africa-China, Caribbean-China relations and how these ties play out on the ground.

Panel 1: The business of education : Chinese scholarships, knowledge exchange and the changing experiences of African students in China

*All times in GMT* 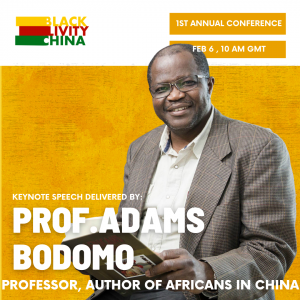 Adams Bodomo is Director of the Global African Diaspora Studies (GADS) Research Centre at the University of Vienna, Austria where he is Chair Professor of African Studies (Languages and Literatures). Professor Bodomo has done pioneering work on twenty-first century Africa– Asia studies, with a particular focus on the African Diaspora in China, African diaspora remittances, Africa’s experiences with globalization, and on the linguistic and cultural relations between Africa and Asia. He is the author of well-cited works on African diaspora in China, on African diaspora remittances, and on Chinese investment in Africa. He earned his BA and MA from University of Ghana, Legon and his PhD in Linguistics and African Studies from The Norwegian University of Science and Technology (NTNU), Trondheim. 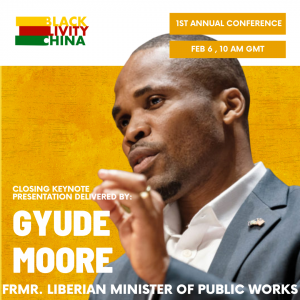 Gyude Moore is a senior policy fellow at the Center for Global Development. He previously served as Liberia’s Minister of Public Works with oversight over the construction and maintenance of public infrastructure from December 2014 to January 2018.

Prior to that role, Moore served as Deputy Chief of Staff to President Ellen Johnson-Sirleaf and Head of the President’s Delivery Unit (PDU). As Head of the PDU, his team monitored progress and drove delivery of the Public Sector Investment Program of Liberia—a program of over $1 billion in road, power, port infrastructure, and social programs in Liberia after the civil war. As one of the President’s trusted advisors, he also played a crucial role in supporting President Sirleaf as Liberia responded to the West Africa Ebola outbreak and shaped its post-Ebola outlook.

At CGD, Moore’s research focus is around financing infrastructure in Africa and the changing landscape of development finance on the continent.  His research tracks the channels of private sources of finance, the rise of China and its expanding role in Africa, and Africa’s response to these changes. He currently serves on the Board of Advisors of the Master of Science in Foreign Service Program at Georgetown University. He holds a BS in Political Science from Berea College and an MS in Foreign Service from Georgetown University. 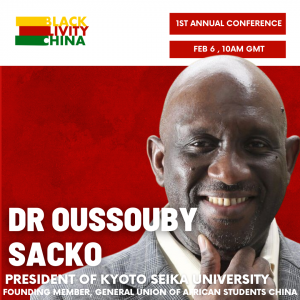 Born in Bamako, Mali, Dr Oussouby Sacko went to China (Beijing and Nanjing) to pursue his education in the field of architecture. While in China, he became a founding member of the General Union of African Students, the first-ever attempt at unifying African students across China.

Since leaving China, Dr Sacko went to Japan, obtaining a Master Degree and a Doctor Degree of Engineering in the field of Architecture and Architecture Planning from the Graduate School of Engineering at Kyoto University, Japan. In April 2018, Dr Sacko made history and became the first African president of a Japanese university, as the president of Kyoto Seika University. 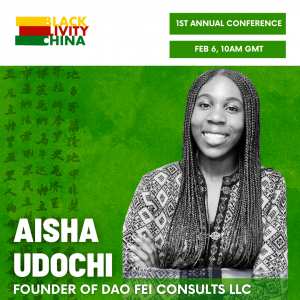 Aisha Udochi is an Africa-China researcher and doctoral student in economics at Howard University, concentrating in growth and development theory. She is also the founder of Dao Fei Consults LLC, a business development and research consultancy firm. Recognized for her work on formalizing and growing indigenous microenterprises, she was recently appointed to serve as Special Advisor to the Small and Medium-Sized Enterprises Commissioner for Abia State where she is leading a redesign of the state’s industrialization strategy. For her most recent study she completed field research on Chinese involvement in Nigeria’s shoe manufacturing industry where she examined the role of FDI and knowledge transfer in facilitating local development.

Aisha is originally from Fugar, Edo State, Nigeria. She has lived and worked in New York, Abuja, London, Beijing, and Boston. Currently, she is based in Washington D.C. She earned a bachelors of science in International Business and Business Economics from New York University’s Stern School of Business. She holds two masters in Chinese Studies and International Relations from the School of Oriental and African Studies (SOAS) and Harvard University, respectively. Aisha speaks Mandarin and is a devout yoga practitioner. 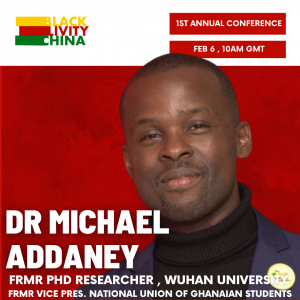 Michael Addaney is a recent PhD graduate of Wuhan University, China; and lecturer at University of Energy and Natural Resources, Sunyani, Ghana. Michael was a visiting researcher at the Research Unit on Law, Justice and Sustainability of the Faculty of Law, North-West University, Potchefstroom, South Africa and the Grotius Centre for International Legal Studies of Leiden Law School, Leiden University, The Netherlands. Michael’s research interests broadly focus on the role of international human rights law in framing and implementing responses to sustainability challenges in sub-Saharan Africa. He also researches Africa’s sustainable development and China’s rising geopolitical interests on the continent. 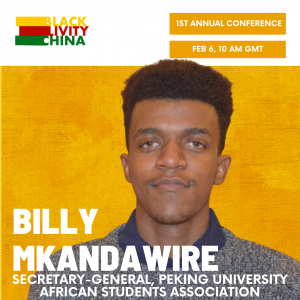 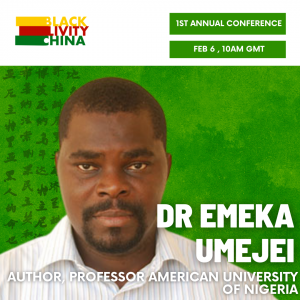 Dr. Emeka Umejei is a leading scholar of Chinese media and Chinese digital infrastructure in Africa. His book, Chinese Media in Africa: perception, Performance and Paradox, was published to wide acclaim. He is one of the authors of the Nigerian Media Landscape responsible for the segments on digital technology, innovation, traditional forms of communication, and the conclusion. He holds a master’s degree in journalism and media studies from Rhodes University in Grahamstown and a Ph.D. in journalism and media studies from the University of the Witwatersrand in Johannesburg, South Africa. 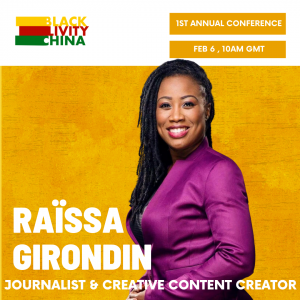 Raïssa Girondin is a journalist, television and radio host specialist in African issues. Since 2020, she is the co-founder of GMedia, a communication agency specializing in media training, public relations, and content production for companies, personalities, and institutions Africa-related.

Graduated with an MBA from ESG business school in Paris in 2009, she worked for the French media conglomerate Lagardère for three years as a sports communications professional before turning to journalism.

She started her journalism career with the press in Paris with Amina, the magazine for  African women. Then, for the Chinese state media CGTN, based in Beijing, she was in charge of hosting the daily television news program in French-language between 2013 and 2016 and won the award of News Anchor of The Year for reporting on the growing Sino-African relationship. Raïssa joined Voice of America, based in the United States, from 2017 to 2019, hosting the weekly debate ​Washington Forum, and presenting daily radio news.

Her career as a journalist includes more than 1000 newscasts and live debates. She has conducted exclusive interviews with numerous leading African personalities – the President of the Republic of Congo, Denis Sassou N’Guesso, the former President of the Republic of Mali, Ibrahim Boubacar Keita, the Commissioner for Peace and Security of the African Union Smaïl Chergui, the Ivorian international soccer player Gervinho etc. in Europe, Asia, North America and Africa. 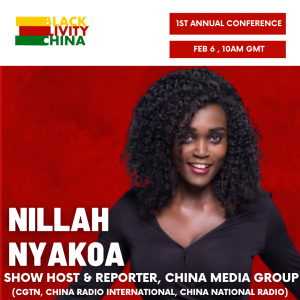 Nillah Nyakoa is a Kenyan Show Host & Reporter at China Media Group (CGTN, China Radio International, China National Radio). She is a journalist with an obsession for Current Affairs, a passion for Humanitarian Reporting and curious about all things.

Ciku Kimeria is a Kenyan author (“Of goats and poisoned oranges”), development consultant, adventurer and travel blogger (www.thekenyanexplorer.com). She lives and works in Kenya as a consultant focusing on international development 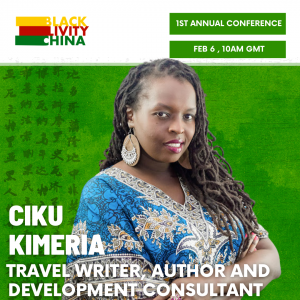 issues and has researched and has previously written on Chinese influencers in Africa. In her free time, she enjoys writing and travelling. She is particularly fascinated by the universality of human emotions and enjoys reading books about people whose culture she knows little about. 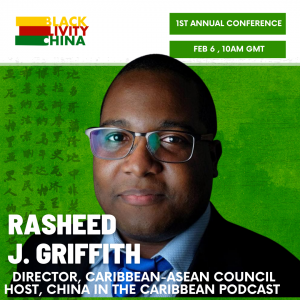 Rasheed is a Director of the Caribbean-ASEAN Council based in the Philippines; a Research Fellow of Future Forum – a Public Policy think tank based in Cambodia; and an Executive Member of the Association of Barbados-China Friendship. Additionally, Rasheed is the host of the new ‘China in the Caribbean Podcast.

Elsie Harry is a 28-year old, aspiring planning professional, currently pursuing a Master’s Degree in Urban and Rural Planning at the Beijing Jiaotong University in China. Elsie also holds a Bachelor’s Degree in International Relations from the University of Guyana, where she graduated as Valedictorian in 2017. She is currently the Sustainable Community Development Officer at a Non-Governmental Organization called the International Decade for People of African Descent Assembly-Guyana. She loves her work because it is heavily focused on improving the lives of people through planning, which aligns with her development approach. 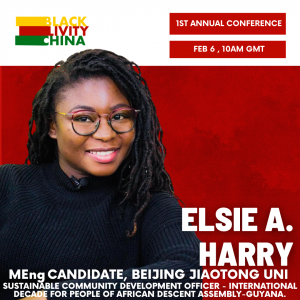 She has worked as an intern at her University’s College of International Education, the Tangshan Campus, where, in 2019, she played a critical role in the execution of their first Belt & Road Forum for High School Principals. She has also worked as a Television and Radio Show Producer and host, an Admin Expert and a Broadcast Journalist.

Excellence is her motto and way of life and she has a deep passion for politics, nation-building and the arts. In 2016, Elsie was awarded a Commonwealth Youth Worker Award for her contribution to Youth Empowerment through Sports and Arts and in 2020 she was named a finalist in the Spoken Word Category of the Guyana National Drama Festival. She is a Royal Commonwealth Society Associate fellow, a One Young World Peace Ambassador and a mentor for young adults.  Ms Harry is development-minded and is prepared to build Guyana and the Caribbean Region. She wants to see every sector thrive and every citizen become productive. 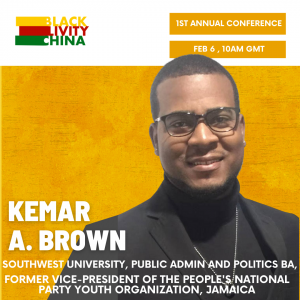 Kemar Brown is a Jamaican national who formerly served Jamaica’s People’s National Party Youth Organization (PNPYO) as 1 of 4 Vice Presidents and was placed in charge of Regional Integration. It was in this post that he lobbied for more Scholarship Opportunities for young people of Jamaica to go overseas and study as well as fostered and deepened relations with friends from China, Cuba, Venezuela, South Africa and the Caribbean Region.

As part of an 8-member delegation sent by the PNP to study and have bilateral talks with the CPC, Kemar’s delegation was able to secure 7 3-week seminars for young Jamaicans to be hosted by the Chinese in China. To date some 60 Young Comrades have benefited from the China relations having gone on short courses in that country.

Kemar is currently reading for his Bachelor’s Degree in Public Administration and Politics at the Southwest University in Chongqing, China.