From award shows to online platforms such as Netflix, African cinema has been making strides over the last few years, and the world of African animation is no different! On Saturday the 7th of December, the Burundian Students Association of Beijing and Black Livity China invite you to celebrate this success with NIFLOOF’s Motion Pictures, creators of the short animated film Ntare Rushatsi – The Lion and The Sheep. The film tells the story of the first king of Burundi, Ntare Rushatsi. Read below for an insider peek with the filmmaker. 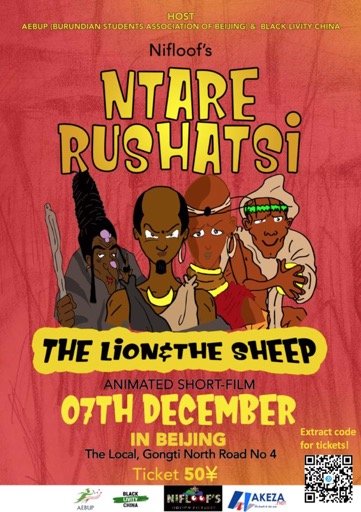 Nifasha Florian, the Director of the 2D Animation and CEO of the Nifloof’s Motion Pictures has worked tirelessly for 9 months with several artists from different Backgrounds such as sound engineer, singers, actors, illustrators and pushed this animation project to the limit. Bringing the impossible dream to the screen as a 20min, 2D animation, celebrating the life of the first King of Burundi. Along with the screening of the 2D short Animation comes a special behind the scenes documentary in which the audience is taken to a journey following the team that worked on the animation from the beginning to the release date.

Creating animation is a very time-consuming and expensive art. In some parts of the African continent, it leaves artists all by themselves because it’s not yet well anchored in people’s mind. Many funny cartoons have died even before seeing the light of day because Artists abandoned their dreams, stopped following their passion and good ambitions in order to seek their daily bread elsewhere but the animation sector.

Despite the lack of funds, expertise, support or market, we strongly believe that there is a bright future for 2D & 3D Animation in East Africa and in Burundi as well. That’s why our mission is to keep turning ordinary artists into fearless entrepreneurs ready to take the world by storm according to our vision: “Celebrating our culture. With an African content for an African audience”.

In the creators’ words…

Can you tell us a bit about yourself? How did you get started?

I was born and raised in Bujumbura-Burundi. Firstborn in my family and I am a filmmaker and a national Consultant-Illustrator for many organizations. I don’t recall a time in my life when I was not drawing. As I grew, it got more serious everyone thought I was crazy. I made my first comic book when I was 12. The passion for cartoons, theatre and illustration, was growing stronger than when I had to choose a faculty for university, despite the opposition and doubts of almost everyone in my surroundings, except my mother, I went for Animation and Film-making studies in India. I knew deep inside that I had to chase my dream. Then I went back to Burundi and started an animation and Film Production company back in 2015.

What inspired Ntare Rushatsi – The Lion and The Sheep?

Nifloof’s is an animation and film production company with a mission to tell African stories. One of the stories to bring to the screen was the lineage of the dynasty Ganwa who reigned over Burundi before independence and Ntare Rushatsi was the first on the list.

Can you tell us a little about the film and the history it draws on?

The film displays one of the myths of how the first king of Burundi came to rule over that small nation. It tells the story of Jabwe who betrayed his brother Nsoro by having a baby with his wife, causing the two brothers to hunt each other to death. Ntare the baby who was born in that family feud will be sent to be raised by his aunt, the queen of Buha. Ntare will grow up to become as strong as a lion and gentle as a sheep before a witch from his father’s land asks him to return to Burundi and save the nation. He will end up being crowned King.

The film centres around the then King of Burundi Ntare Rushatsi – why is it so important for us as African people and people of African descent to tell this type of story (around our own history)?

I strongly believe that our history, culture or tradition somehow gives us a unique identity among all other nations. It is good to display and showcase those colorful differences in our cultures for the world to see we exist.

Plus, our childhood was mostly packed with western animations and movies, which has impacted the way we talk or see the world. It all starts from one’s childhood to be attached to a culture. One of the ways to help kids get attached to their culture is to use any means in the multimedia universe. It is also important to let Africans tell these stories because they are ours, and we would tell them better. 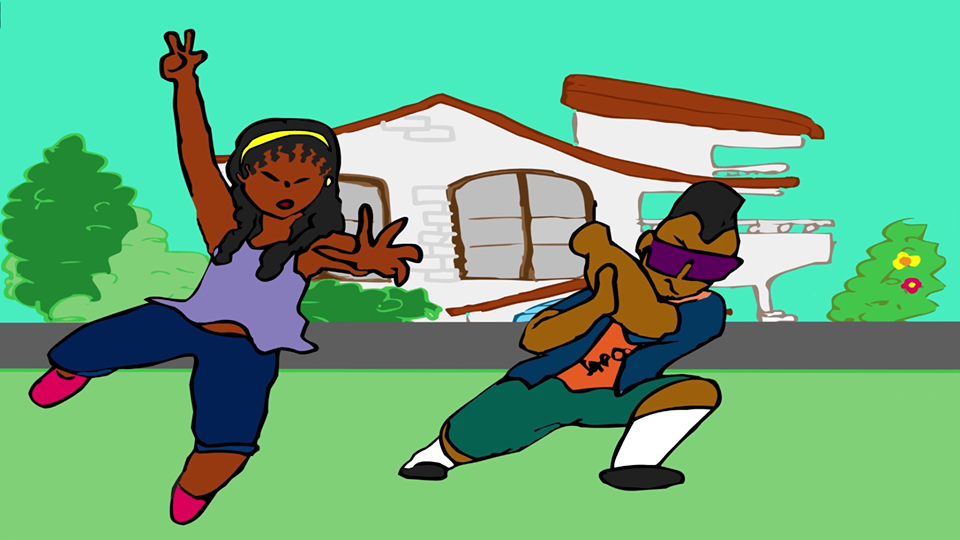 You’ve been touring and premiering your short film across the world and have decided to stop off in China – what about China brought you here?

After the release of the short film, we had to screen it to tell our story. China had a great number of Africans and Burundians as well. Knowing that we create African content for an African audience, it became a very interesting pole and city for us. Moreover, hoping that our content can inspire other African artist living in china not to give up their dreams.

What would you like China’s Black community to know about you and your mission?

All I want people to know about myself is that I’m someone who is trying to build a cinematographic system that works for Africans following the mission and vision of telling African stories through African content to an African audience.

What can we expect at the event on the 7th of December?

All you can expect at the event is to go back home, thinking that your dreams are valid. It can be a time of evaluating if you gave up your dream or if you are living it.