Food is at the heart of most cultures, and across the African diaspora, this is no different. Caribbean cuisine has been growing in popularity worldwide over the last decade or so, largely due to the numbers of Caribbean people travelling overseas and bringing the flavours of home with them. While cities such as Beijing have long boasted a healthy Caribbean food scene, Shanghai’s is just emerging, pioneered by Executive Chef of El Caribe restaurant Maritza M.Ellis and her daughter Elle.

Ahead of their pop-up kitchen this weekend, Black Livity China caught up with the Afro-Hispanic mother-daughter duo responsible for bringing Costenan cuisine to the Shanghai masses – all the way from the Republic of Panama!

Please tell us a bit about yourselves:

Maritza: I’m an entrepreneur at heart and have devoted the past 11 years in the culinary world due to my love and passion for cooking.  I’ve done many things outside of cooking too though – I’m also a practising attorney in the Republic of Panama. I hold a (BA), a (BSN)-Bachelor of Science in Nursing, (JD) Juris Doctor in Law and two Masters in law. Culturally, education is of huge importance to us.

Elle: My name is Elle Baptiste and what a lot of people don’t know is that I am her daughter. I have lived in China for 5 years. I came originally because I became aware of China’s global importance and wanted to push myself to learn the language and beat the tide. I’ve been working hard as the creative director and marketing manager of the El Caribe Pop Up Kitchen this weekend, employing tools that I received while living here.

We rarely hear of the experiences and cultures of Afro-Hispanic people here in China – Tell us a bit about your background/culture and identity?

Elle : Well, as mentioned I identify as Panamanian of African-Caribbean descent. Although born in the States my mom, myself and my twin brother moved back home when my brother and I were just 9 and that has meant I have a strong cultural identity – I’m Caribbean, Hispanic and Black – proud of all three and while navigating China I make sure to represent my culture. Growing up in Panama, my mom made sure I knew of my blackness and who we were so this has never left me. I also encourage other Afro-Latinos I meet here and in our community to do the same.

Growing up, before I moved back to the Republic of Panama food was one way that I began to understand what being black and being Caribbean was – for example, I remember bringing my lunch box into school and I’d have a plate of curry chicken and rice and peas ready to warm up – meanwhile, all the other kids looked on in awe haha, everyone wanted to know if they could pay me for my lunch. I remember wondering as a kid ‘why doesn’t everyone else have this food’.

Food is a massive part of our culture and we bring it with us wherever we go in the world. In a Caribbean household or a Latin household the cooking lasts the whole day –you’ll smell the aroma of what’s being cooked for hours before you actually get to eat haha. And most importantly food has come to be a way of connecting with family and loved ones. – That’s why holding El Caribe pop up kitchen has been so important to us.

When my mom founded El Caribe, it was prompted by her desire to keep the Caribbean culture alive through food, because in Panama our culture and heritage is disappearing due to foreign influence and because sharing food has always been an act of care in our culture.

So naturally we’re bringing that here.

In terms of my experience in China…well the type of innocence I had before coming here has completely changed. I always knew who I was, but once coming here, my difference became even more unique – from my colour, to my culture and its different layers. I’ve begun to realise how unique it is and that’s partially why we’re trying to tell our story by way of cuisine.

Why is this legacy important to you?

Maritza: I grew up in Colón, Panama, the province with the largest black community in Panama. We’re known for our food. If you tell a Panamanian you’re from Colón there’s almost an immediate expectation that you can cook. 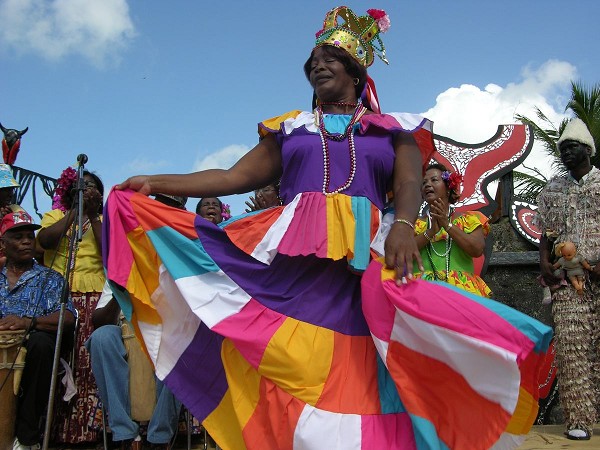 My grandmother Adely Wedderburn was born and grew up in Bocas del Toro, the 2nd largest province in Panama with the most African descendants, and moved to Colon at the age of 22 – I’m so grateful to her for giving me the blessing for her hands and for being able to experience both areas. I’m essentially continuing this legacy and very proud to be doing so.

Elle: I grew up around the kitchen, watching my mom diligently build her restaurant from the ground up. I decided to bring the pop-up kitchen to Shanghai, because I love the blend of culture that is Shanghai, and I am keen on learning about human connection through different sense; In this case that would be taste.

How does Afro-Hispanic identity play out through your cuisine?

Maritza: So Caribbean food overall is a fusion of African, Amerindian, European, East Indian, Arab and Chinese influence. To this, the indigenous population of the Caribbean Islands such as Jamaica, Trinidad, Barbados, Bermuda, Haiti and other islands added their own touches as well.  The authenticity of the food creates a unique flavour that is best remembered for its spices such as: ginger, curry, turmeric, coconut, scotch bonnet pepper (often referred to as the hottest pepper in the world), and much more.  No wonder that Caribbean cooking is known for their unforgettable and unique blends of herbs and spices.

What is Costeñan cuisine more specifically?

Maritza: The key thing that makes Costeñan cuisine unique is the infusion of coconut milk to the food to take the edge off the curry. This form of cooking is found among the black people of African descent that arrived and currently live on the coast of the Province of Colón, Republic of Panama. As mentioned, I’m a native of Colón and as such, I’ve been influenced by this style of cooking from childhood. Its very delicious and this is the type of food we’ll be serving at the pop-up kitchen

What are the African influences you see in your cuisine?

Maritza: Our cuisine is ultimately the product of Africa. When Africans were taken out of the continent and dispersed across the world one of the things, they were able to save is their cooking which they have shared with the new world that they went to. This is evident in ingredients such as plantain and our ways of cooking. African descendant cooking that transcends into Caribbean cooking is really all just one in the same. There’s just a minor variation in the spices used.

Elle: Its interesting actually – being in China has given me the opportunity to learn more about cuisines and cultures of the continent. An opportunity I’d never had before – living in the states I’d only met a couple of African people, directly from the continent. It was here that I connected in the sense of the wider African community  – and its been truly important to me.

I would say that most African and Caribbean cuisines encourage the use of fresh ingredients, and ours, as part of that, is no different. While in Panama growing up we used to hike and climb trees for our ingredients – but the emphasis is on healthy, tasty food that nourishes the soul.

Chef Maritza, you’ve mentioned you come from Colón, often considered the hub of Panama’s black community – what was it like growing up there?

Colón was a beautiful place to grow up and captured the heart of Panama’s Afro-descendant community. It was a safe place to live and very tight-knit.

It was this same beauty that encouraged me to relocate back home when my children were 9 years old to immerse them in their culture and give them a chance to live amongst the community I grew up in. It has changed over the years but it is still fondly home.

Do you think Caribbean/Costeñan food will be popular in China?

The genre of Caribbean and Costeñan food is so vast that it is essential that a Shanghai food market would be introduced to this exciting way of cooking.

I can’t think of a type of cuisine here in China which is similar to ours, but Panama has a sizeable Chinese population with most Chinese-Panamanians coming from down south, Guangdong province. So that’s a link we have with the middle kingdom.

What can people expect at the upcoming El Caribe pop up kitchen?

Our venue has an open kitchen which will give that home-cooked feeling with the aroma of food wafting through the dining room – just as in a Caribbean household.

We’ve partnered with Ron Abuelo to bring the spirits and beverages of the region along with us, plus some pretty awesome 2-4-1 deals too. Kids platters are 50% off to allow the entire family to enjoy. We’re also offering a special student platter.

And finally expect to hear music reminiscent of Panama. All in all it will be a memorable experience!

Elle: We do plan on having future events so watch this space. On a larger scale though, my idea for the Shanghai event, was turning it into a docuseries. I love the blend that is the Caribbean and I am very proud of my heritage and my background of being a black, Hispanic, Caribbean female. Plus, I have a true passion for communications, media, and journalism as a whole. If this time I unable to document the event, I would love to use this platform to establish a career in something of the sorts.

If you’ll be in Shanghai on the 27th of June, head down to Azul restaurant from 5pm to 12 midnight to experience Costeñan Caribbean cuisine first hand!

Want to find out more about El Caribe Restaurant in  Panama? Check the links below for more: